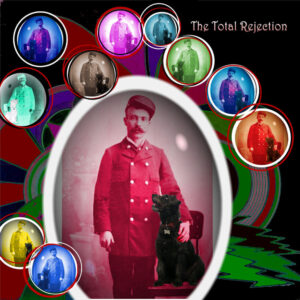 The Total Rejection  – The Time Traveller’s 3rd Will And Testament  (Raving Pop Blast!)

Their third long playing album.  Garage Punk, Pop-Psych belters, that will eat their way into your brain.  This is more Retro-sounds for Future-daze.  Vintage aesthetics for the Outsiders of Today…. says Ged Babey who’s been a total reject all his life.

We, The Total Rejection, being, arguably of sound mind, do hereby declare this to be our third and grooviest will and testament and do hereby revoke any and all wills and codicils heretofore made jointly or severally by us. We further declare that this Will reflects our personal wishes without any undue influence whatsoever man, it’s cool. On our dissolution, our estate, profits and really, really cool record collections are to be given to Ged Babey…

Whaat?  No, Sorry. This is an utterly brilliant album. Play from start to finish. It’s an album, not a collection of singles or a series of songs, you dig?

In a break from tradition, I’m just gonna sit back and let the Total Rejection review their own album, because hey, they are the experts surely – they were there at the conception, the birth and the day it left home! And I can’t put it any better. And I said it all before.

The songs are stuffed with pop melodies and the sound has it tentacles over all manner of 60’s bands – the cover of Bohemian Vendetta’s ‘Enough’ gives a clue as to where the band’s collective head is.

Elsewhere, the opener ‘Gravy’ is taut and desperate before giving way to the fuzz bass driven ‘Drilling Holes’.

Standout track ‘Fly’ starts off like a violent ’65 Who before turning into a Hawkwind style psych-wigout and the meditative ‘Caravan’ gives a pause for contemplation. ‘Next Time I See You’ cheekily proves you can indeed get some 60’s ‘Satisfaction’ in the 21st Century.

‘Tracy Said’ is a breathless tale of slapstick teenage naughtiness before live favourite ‘Ain’t Gonna Lie’ leads into the mighty closer, ‘Distress Signals’. This final track is a fuzzy, violent, claustrophobic assault on the ears – A frenzy of throbbing keyboards, wah guitar and all manner of sonic mischief and madness, vibrations and sensations,

The album is beautifully produced in a way it sounds like it wasn’t produced at all. Totally raw and occasionally rough-edged, exactly how music was recorded, before technology smoothed everything out to near blandness.

Guitars twang, chime, fuzz and wah-wah into a frenzy of excitement, Vocals stretch beyond their abilities and occasionally scream and break, Organs swirl, and a variety of ‘strange sounds’ all of which were created by experimentation, rather than using modern day ‘plug ins’ or ‘pressing buttons’, will have you wondering, what is that?…

This isn’t a band blowing it’s own trumpet – it’s just the Truth, the whole truth and nothing but.  The Total Rejection are simply a brilliant band playing by their own rules, inside parameters of taste and economic necessity and to an aesthetic.

The universal praise (in garage-punk-psych circles) for the previous album seems to have boosted their confidence and drive to do something even better – and they have.  There really isn’t a dull moment or wasted second on TT-T3rdW&T.

The man at the centre of the Total Rejection, Arthur, constantly doubts himself and his bands abilities – but this album will stand for as long as the vinyl, CD or downloads exist and are listened to, as (the 3rd) testament to his and their artistic, spiritual and rock’n’roll greatness.

The Total Rejection have received Absolute Acceptance in my world. Let them into yours. They have bequeathed everything they have of value to you after all, in the form of this LP.